In Yucatán we have what we call «Cenotes» which are bodies of water under the ground. They are beautiful, the water has this reflex that gives a color blue so deep and beautiful; in other Cenotes, the color is green like an esmerald made of water.

The water is damn cold. You have to be aware that here in Yucatán is always sunny and I don’t say that with the intention to bragg. Too much sun can be tiring, too. And when is april, may or june, the temperatures rise to 40 degrees or MORE. So for us, when we say «cold water» could be laughable for people living in countries where winter is really cold.

Anyway, being under the ground, the water is cold, for me at least. So what I do is take a deep breath, and jump into the water praying that the coldness won’t give me a heart attack. Hasn’t happen so far.

The kids love the Cenotes, because they have big rocks in the bottom, in some parts of the Cenote you could put your feet in those, some other parts are bottom less.

They are kind of dangerous, because if you get caught in the current which goes under water, can take you along, deeper and deeper. Is better to be careful.

The most famous «Cenote» I think in the whole wide World, is the one in Chichén Itzá. Is big, really big. And the mayas used to throw virgin girls to the Cenote. They did that to calm down the Gods, maybe because some war was about the start, who knows? First they dressed the girl, who considered it an honour, with beautiful and rich clothes and lots of jewerly in pure solid gold.

The poor girl with all that gold was drowned in seconds, dying to pacify the Gods. Didn’t work because, as we all know,  the mayans eventually  lost all their power and greatness.

Some years later, came an american name Frederick Catherwood, with a tractor with a mecanic shovel, and took away all the gold of the Cenote. He got away with it without trouble, because that was the 18th hundreds and in Mexico barely there was any law to protect the historic past of ours.

Celestún is another body of wather, this time is a «Ría» , like an arm of sea water that gets a little into the ground, Lots of flamingos like it there in winter time. So, the best time to go is in december, or january, or february like right now.

You have to rent a little boat, for a decent amount of money and the guide takes you to see the flamingos, and to the «manglar», where you could swim a little. Is very fun.

After that, there is the beach, because Celestún is most of all a beach, and have a swim in the ocean, eat delicious sea food, and I mean delicious. 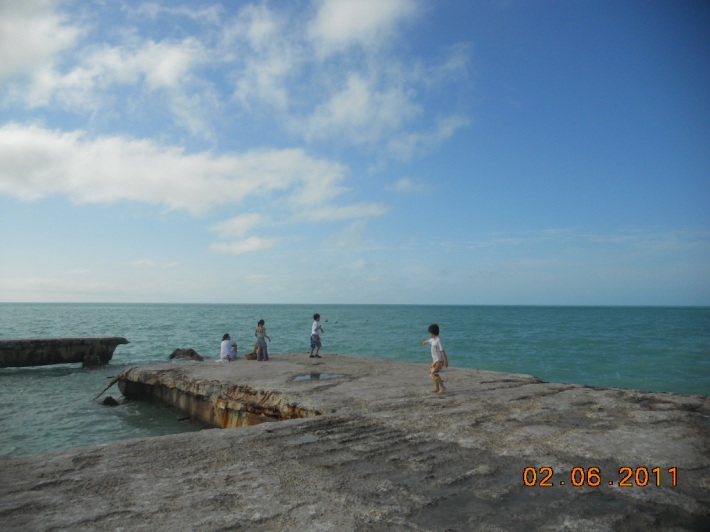 Those are my kids playing in the «spring» (muelle) of Celestún. Which is abandoned because was destroyed in one of the recent hurricanes.

Next time in Guide to Visiting Yucatán: Haciendas.